What is Fair Use?

Fair use is a principle present in US copyright law that pertains to the usage of copyrighted material in a limited manner, without prior consent from the copyright holders. Fair use of copyrighted material refers to the limited usage of such material for the purpose of criticism, commentary, teaching, research and news reporting.  Fair use and its related guidelines were clearly defined in 1976 under section 17 of the United States Copyright act. As per section 17 of the United States Copyright act, fair use is considered valid if the following aspects are observed: 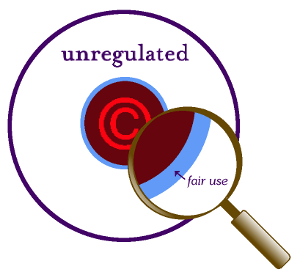 The nature of the copyrighted work primarily deals with the facts and ideas that have been copied from it. Fair use of such facts and ideas copied from factual work in the public domain, has larger scope than copying of fictional copyrighted work. The scope of fair use is limited when it comes to unpublished works, as the author has the privilege of control over the first public manifestation of it.

The effect of the use of copyrighted materials deals with the consequences it may have on the copyright owners market. The consequences could include adverse effects on the commercial viability of the original work. Such negative outcome cannot be considered as fair use.