Quasars are a phenomena that, to this day, continue to baffle and confuse astronomers. There are different theories. One is that a quasar is formed from a super, massive black hole. Another theory is that a quasar is actually a baby galaxy and is at the earliest stages of development. However, since no one really knows what galaxy development is, there is no way to tell if this theory is sound. Other theorists propose that a quasar is the opposite of a black hole and it is allowing new matter to come into our galaxy. The most sound theory, though, is the first one which suggests how it is formed.

How are Quasars Formed

According to the most educated pointed, a quasar is formed by a super, massive black hole sucking in a considerable amount of matter in an acceleration disk. This causes the matter to begin spinning around this disk. And, because it is an acceleration disk, the matter will continue to speed up on a regular basis.

As the matter speeds up more and more, it will begin to heat up. As it heats up, the matter begins to rub against other bits of matter. This causes friction which, in turn, results in light. This light is what is visible to us.

By measuring the spectrum of their light, astronomers are able to determine how far away the quasars are and at what speed they are traveling. In the case of most quasars, they are in the red spectrum–the farthest away from us–and are traveling away. That could mean that when we see a quasar, it is ten billion light years away. In other words, we are seeing a quasar that was alive ten billion years ago. When we see it, the actual quasar–not its light–might already be gone. 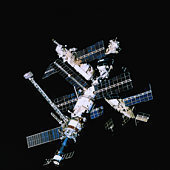 Perigee is a term used to describe the closest point at which an object orbits ...