A tsunami is formed when there is an earthquake, volcanic eruption or, more rarely, a landslide underwater. Typically, neither the earthquake, eruption or landslide are felt because they are so deep under water. However, the actions that have taken place are the first steps that lead to a massive tsunami that can cause tremendous damage to coastal regions.

It should be noted that a tsunami and a tidal wave are different because they are not caused by the same thing. A tsunami, as mentioned above, is caused by earth quakes, volcanoes or land slides. A tidal wave, as the name suggests, is caused by tidal movement. Therefore, the two are different, although both do produce high waves and can do considerable damage.

When an earthquake happens, for example, a massive amount of energy is released. It has been documented that the earthquakes that cause tsunamis are a few minutes and release slower amounts of energy than sharp ones that last only a few seconds. However, this consistent release of energy needs to go somewhere and that’s what leads to the tsunami.

All of that energy pushes water up. And, as more energy is released, more water is pushed up. A large earthquake can lift thousands of square miles of ocean water with ease. This creates a rather large wave. This large wave then needs somewhere to go. And so it heads towards land. When it is going through water, it might only appear to be about a meter high and even when it crashes onto land, it’s not going to be a hundred feet like shown in sci-fi movies.

The destruction of a tsunami comes from all of the energy built up in that water. The wave crashes onto land and because of how much energy is pushing on that water, it just flows onto land. It doesn’t stop because there is more water behind it with so much energy pushing. This is what causes the destruction. It’s not a massive wave that swallows buildings whole. Instead, it is the energy behind the wave that does all of the damage. 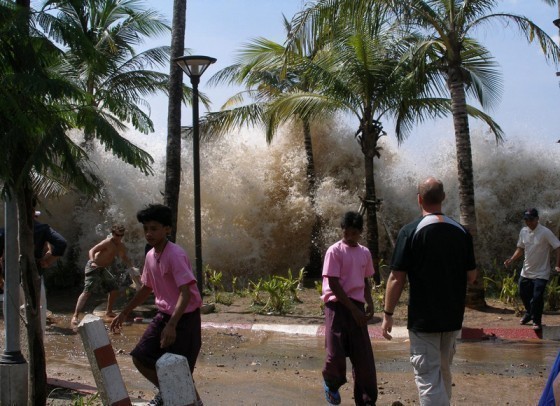 Two of the most common natural warnings that a tsunami may be coming are earthquakes and a rapid fall or rise in coastal waters. Being inconvenience for a few hours is a small price to pay for saving your or your family’s life. Over the past 40 years, there are a number of examples of individuals ignoring drastic drops in sea level on the coast that preceded significant tsunami waves.

#2 Expect a Number of Large Waves

The first large wave when a tsunami strikes is not necessarily the last. Many people were lost in the 1960 Chilean tsunami in Hawaii when they thought the danger was past after the first initial wave struck the islands.

#3 Find High Ground and Stay There

Once you receive an official tsunami warning or observe a natural warning sign on your own, find high ground. Once you find high ground, plan on staying for a while until you can be sure the danger has past.

#4 – Leave Your Belongings Behind

Over the years, a number of people have lost their lives by being slowed down bringing too many possessions with them or going back to areas in the tsunami danger zone to retrieve non-essential belongings. You should take only what you can easily carry without being slowed down if the danger of tsunami is imminent.

#5 – Expect Roads to Disappear or Be Unreliable

Between the earthquakes which typically trigger a tsunami and the significant volume of water that strikes a coastal area with the large waves, most roadways will be unreliable. In many cases, the road(s) will simply be wiped away. In others, they are made unstable and potentially dangerous to pedestrian or automotive traffic.

If you find yourself or your family trapped, go to the roof or top-floor of the closest, sturdy building. This is not as good as heading to high ground, however, if you are in “Fight or Flight” mode, flight to the highest structure you can reach can mean the difference in death or survival. The building may still collapse, however, there have been a number of tsunami survivors in the past 50 years who lived only because they followed this advice.

If there is not a building or high land nearby, then climbing a tree is better than nothing. You and/or the tree may still get swept away by the wave(s), however, your odds of survival will increase the higher in the air that you are if trapped or penned in by the wave(s). This is a last resort technique, however, with finding high ground still being the best survival tactic.

#8 – Find Something that will Float

If you get swept up by the waters from a tsunami, then look for something that will float and grab hold or climb on top of it. This can range from anything such as an uprooted tree, building rooftop, to other wooden materials. Cars and other metallic structures tend to sink eventually and are not a good option to use. If you are floating on a structure, realize that it could be up to a day later before the waters subside enough for you to become mobile again.

Earthquakes that trigger tsunamis have been known to lower coastal land by up to 10 feet or more. As a result, areas that might not be susceptible to flooding at high tide, may now be dangerous to linger around. Be aware of your surroundings and do not trust the history of an area, instead relying on your or others observations of where flooding may still occur.

Tsunamis will leave behind a lot of debris to include dead bodies, animals, and other potentially dangerous substances. Do not enter structures or touch anything that looks out of the ordinary until you can be absolutely sure it is safe. Many people lose their lives or become sick in the immediate hours after a tsunami subsides.

There will be a significant number of impacted persons after a tsunami. If you are lucky and are able to provide shelter or food, expect that you will see significantly more people than you would normally shelter on your property. With limited food or water supplies, making plans for proper rationing of your available supplies will ensure that you can aid the most people until national or international help can arrive.

Weather modification refers to willful manipulation of the climate or local weather. Research done in ...