There are three stages to a thunderstorm’s life cycle: the cumulus stage, the mature stage, and the dissipation stage. When a thunderstorm begins to form, it does so at the cumulus stage. From there, the storm advances in severity until it reaches its peak at the mature stage and then begins to gradually die out as it enters the dissipation stage.

The cumulus stage is the first stage of formation for any thunderstorm and is characterized by a few noticeable factors.

First off, a thunderstorm starts by being pushed upwards due to one of a variety of forces acting on it. These forces include solar insolation, which can heat up the ground beneath the thunderstorm and produce thermals. The thermals cause the clouds to rise high into the air. Another possible way in which a thunderstorm can begin to be pushed upwards is if the fledgling storm is in an area where multiple directions of wind all converge and force the air to rise, bringing the clouds with it.

As the thunderstorm begins to rise into the atmosphere, the moisture that its clouds contain begins to cool off and change phase from gas (clouds) to liquid water. When the water undergoes this transformation, cumulus clouds are formed giving rise to the name of the first stage of thunderstorm formation. Also, as the water begins to condense into a liquid, some heat is released which warms the surrounding air, producing an updraft as a result of convection. The updraft caused by the cooling water particles creates a low pressure zone directly beneath the thunderstorm and further contributes to rising thunderheads that are so often associated with a mature thunderstorm. This pattern of rising and cooling continues until the storm reaches the mature stage.

Once a storm enters its mature stage, it reaches a point known as a cap where the air can rise no further. The clouds then transform again into what are known as cumulonimbus incus clouds. As the water droplets that have formed in the clouds begin to combine with each other, the clouds become heavier and the water begins to freeze into particles of ice. These particles of ice become raindrops when they melt as they fall from the clouds.

Thunderstorms produce thunder and lightning in their mature phase because of the mixture of updrafts and downdrafts within their clouds. The heat and the flow of air around the thunderstorm produces a continuous updraft while the falling rain produces a downdraft. With this mixture, an internal turbulence within the thunderstorm is born, giving rise to strong winds, positive and negative charges which create lightning and the possibility of tornadoes. 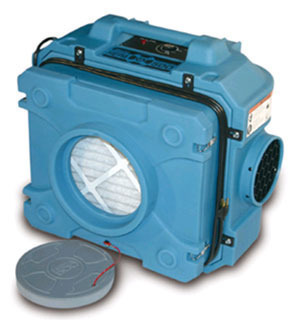 What Are Air Scrubbers?

An air scrubber is a device that removes particles, gases, or chemicals from the air ...