Frame Relay is a protocol for transmitting data over a wide area network (WAN). It was designed to use across ISDN interfaces but it is now used over an assortment of other network interfaces. Once one becomes a master of frame relay design and configuration, it is much easier to obtain a strong understanding of x.25, ATM, and SMDS. Frame relay operates at the physical and data link layers of the OSI model. 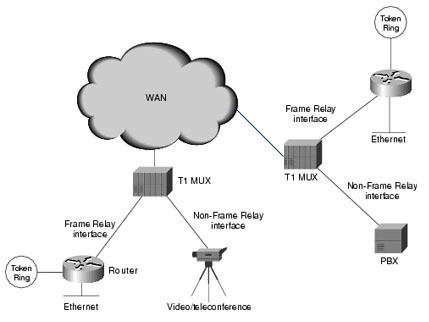 There are two types of devices attached to a frame relay WAN, DTE, and DCE.

At the interface mode of interface serial 1, type:

At the interface mode of interface serial2, type:

The minimum frame relay configuration on a Cisco router consists of a single command:

With this single command, a Cisco router is ready to act as a frame relay DTE device. Once this command is typed, the interface is administratively enabled and frame relay announces the configured DLCIs to the router, inverse ARP executes to map, and remote network layer addresses to local DLCIs. The limitations of the inverse ARP can be remedied with three configuration alternatives and configure a frame relay router address connect broadcast.

Similarities between the frame relay and ATM:

Differences between frame relay and ATM: