The chemicals commonly used in a fuel cell are hydrogen and oxygen. A fuel cell consists of a negative side known as the anode and a positive side known as the cathode. In case of hydrogen and oxygen, the fuel to be supplied is hydrogen, which is permitted to react with oxygen through a medium called electrolyte in the presence of a catalyst thereby producing electricity. Hydrogen is thus supplied through the anode of a fuel cell. When hydrogen comes into contact with the catalyst present in the cell it splits into two hydrogen positive ions and two electrons. The electrolytes present in the cell blocks the electrons and conducts only the hydrogen positive ions to the cathode side. The electrons blocked by the electrolyte are forced to the external circuit. On the cathode side an oxygen molecule splits in to two oxygen atoms. It also receives the electrons forced to the external circuit from the anode side. These oxygen atoms with strong negative charge in turn would attract the positive hydrogen ions through the electrolyte and combine with it to form water.

The entire chemical reaction involved in the process generates electricity and heat. Generation of electricity in a fuel cell is thus a harmless and eco-friendly process.

A fuel cell combined in series and parallel circuits are found to be capable of producing higher amount of energy. Such a design is commonly known as a fuel cell stack.

How Do Fuel Cells Work?

Fuel cells convert chemical energy into electricity in the same manner that a battery does. Whereas a battery loses its energy after awhile due to lack of chemicals, a fuel cell constantly absorbs chemicals from the air and converts them into electricity. Fuel cells, specifically hydrogen fuel cells, are preferred over other forms of power because they are quiet and efficient. Fuel cells also do not give off any pollution. 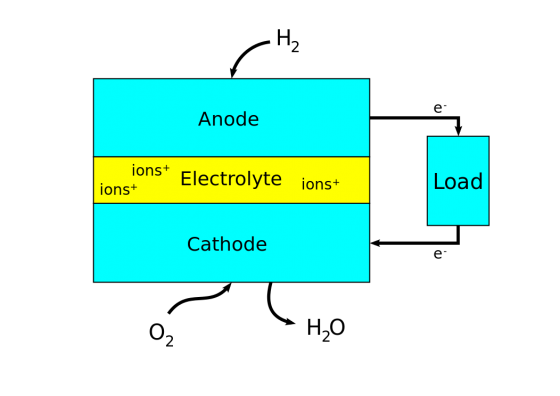 Fuel Cell Stack
The fuel cell stack passes hydrogen through a solid conductor called an electrode. The hydrogen then makes contact with a chemical solution called an electrolyte that separates the oxygen and hydrogen. The hydrogen is attracted to the oxygen and the two elements mix to create water as a by-product. During this process, electricity is created and absorbed into bipolar plates. The bipolar plates are connected to leads that pass the electricity to a mechanical device.

PEMFCs have the advantage of working at low temperatures (about 80 Celsius or 176 Fahrenheit) which means they don’t require expensive or large containment structures to operate. Technological advancements have also led to devices as small as a suitcase that can power up a car.

One of the disadvantages is the problem related to the fuel; while oxygen is readily available (and can, in fact, be pumped in from the air), hydrogen is difficult to distribute and store (especially as it is a volatile and flammable gas). One approach is to use other fuels to produce hydrogen within the cell, using another device called a reformer. Among the fuels being tested are methanol (a liquid fuel similar to gasoline) and propane. Unfortunately, using a reformer to convert these fuels into hydrogen to power the fuel cell is inefficient; the hydrogen is often impure and requires another device to clean it up.