The different nuclear processes will use different types of fuel. In general terms:

Very unstable substances will not be useful, they need to be stable under normal conditions but become unstable when bombarded with neutrons. Special isotopes able to generate a chain reaction are chosen as nuclear fuel.

The known fissile materials are: 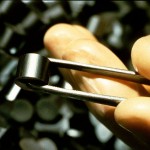 The most often used fuels are Uranium-235 and Plutonium-239; they become instable when bombarded by slow (also known as “thermal”) neutrons. They are not easy to find or produce materials, and the process to generate them is usually the most expensive part in the creation of a nuclear bomb. Uranium-233 was used in a couple of test bombs in USA and it is supposed to be the main component in India’s bombs. Thorium-232 is also fissile but it needs fast moving neutrons to start the chain reaction.

For each U-235 nucleus that absorbs one neutron, two neutrons are yield. Those two neutrons are free to combine with two U-235 nuclei, giving away four neutrons. The number of nuclei fissioning grows like 2^n. The process goes on until the energy emitted breaks the enclosure and the bomb explodes. The remaining U-235 will undergo the fission process with normal decaying rate (the half-life of U-235 is 7.1 x 108 years).

There are around 80 generations in the chain reaction. The whole process takes 0.8 microseconds.

Fissionable: any material with atoms that can undergo nuclear fission.

Fusion reactions are induced by a mixture of the hydrogen isotopes deuterium (H-2) and tritium (H-3), forming heavir helium nucleus.

H-2 and H-3 will not undergo the fusion process in normal conditions. They need extremely high temperatures and pressures for this to happen. The reason lies on the fact that there are two main opposite forces in game, electromagnetic repulsion of the protons and nuclear attractive forces. Nuclear forces are stronger that electromagnetic forces but they have a very short range, so the nuclei need to overcome a repulsive barrier before being able to be at binding distances. This is why all fusion bomb designs use a fission devise as trigger.

Like Tritium is very difficult to confine, most bombs carry Lithium instead and use the fact that Li breeds H-3 when bombarded by a neutron:

The process will be able to sustain itself if part of the produced energy goes to keep the high temperatures and pressures needed to make deuterium and tritium to react. He-4 is one of the most stable elements in nature, so the product atoms will not react by themselves under these conditions. The neutrons expelled during the process will attack more Li atoms generating the H-3 needed for the process, when Li is used as initial element. 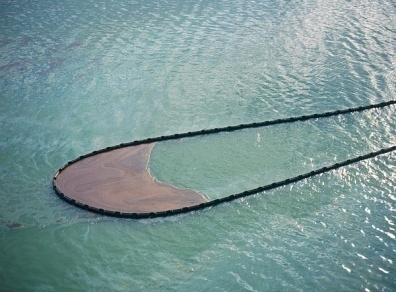