What is the Best Browser?

There are many web browsers available in the market today. Internet Explorer, Mozilla Firefox, Google Chrome, Opera and Apple Safari are few of them which dominate most of the browser market.

There are multiple aspects of a web browser on which they can be compared and rated. Before jumping into details, let’s see some statistics of past few years from renowned names in this market.

Looking at the below statistical graphs from StatCounter, 2011 was dominated by Internet Explorer. Firefox and Chrome also held major share of the browser market. 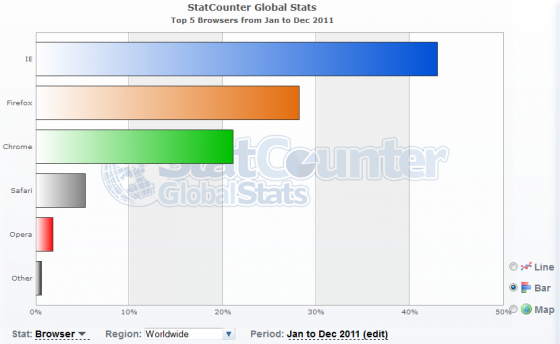 The popularity of Google Chrome suddenly jumped tremendously in 2012 and it left Firefox chasing behind. 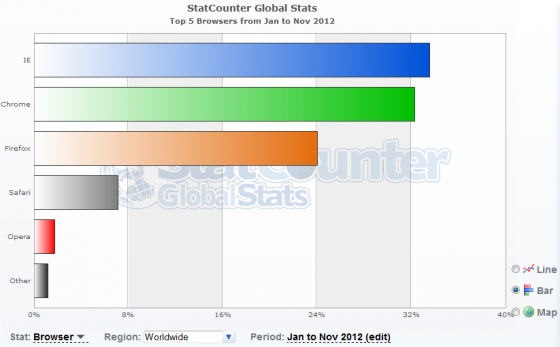 If we breakdown into versions of these web browsers, we see that IE 9.0 and IE 8.0 dominate. Is it because they are shipped with Windows and people are too lazy to change? 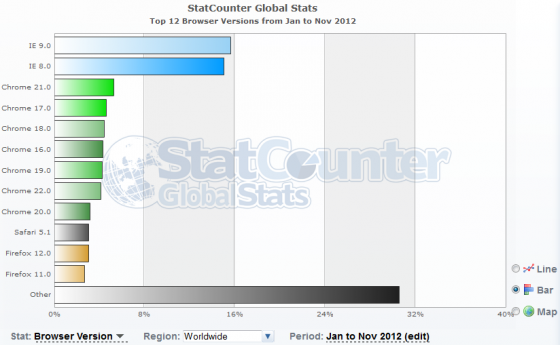 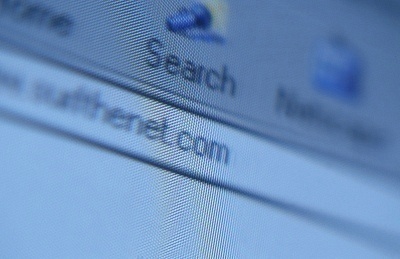 The leading rendering engines are:

WebKit is the rendering engine used by Apple’s Safari browser.

Presto is the rendering engine utilized by the Opera web browser.

Among these rendering engines the primary competitors are Trident, Gecko and WebKit. The key things to consider with regards to a rendering engine is standards compliance and real world performance.

The Gecko rendering engine is considered the leader as far as compliance with W3C standards is concerned, but WebKit and Trident (in Internet Explorer 9) are now also considered standard compliant engines. Thanks to the increased competition in the market, due to Chrome and Firefox, standards compliance has become more widespread.

It used to be that Microsoft’s Trident rendering engine came out on top in real world performance simply because Internet Explorer was dominant, and most web sites were made to work with it. Instead of being standards compliant these sites were then Microsoft compliant.

Things have changed a bit in recent times, as most engines vie for standards compliance, and web sites are designed accordingly. This means most web browsers should do a pretty fine job in rendering web sites as intended. The remaining metric of performance to consider is just how fast are web sites rendered, and various browsers tend to exchange spots in this respect depending on the operating system being used, the current version of the browser, and method of measuring. WebKit (used in Chrome, and Safari) and Presto (used in Opera) are typically reputed as the fastest, but MS also advertises Internet Explorer 9 using its latest Trident engine, as the fastest as well. Your mileage may vary.

User interface is largely a matter of personal preference. Some web browsers implement their own user interface and maintain that interface across all of the platforms they support. Examples of this are Mozilla Firefox and Google Chrome, with some variations between platforms. However, both can be skinned with different themes.

Other web browsers are designed to closely emulate the look and feel of the platform upon which they are running. If you are familiar with the native interface of your desktop environment and you are pleased with that interface, you may wish to use a web browser which closely mimics that interface.

Unless you have specific interface preferences, your will most likely be better served by the Mozilla Firefox, Google Chrome or Internet Explorer browsers.

For most users, Mozilla Firefox or Google Chrome are excellent choices. 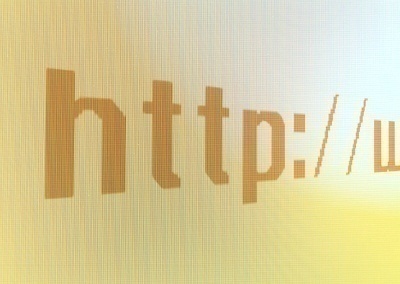 HTTP, or the Hyptertext Transfer Protocol, is defined as an application based set of rules, ... 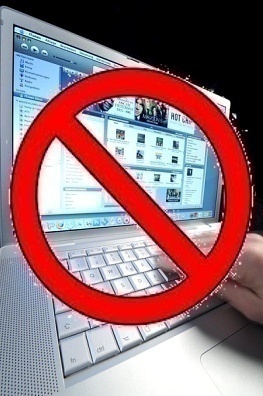 How to Block Websites

Most Internet users need to block websites at some point. Reasons for doing so include ... 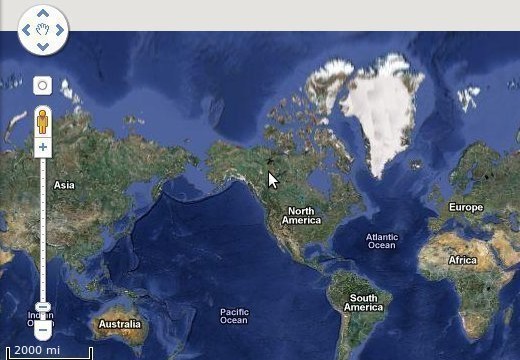 Despite some people believing that Google Earth is a continuously updated program that allows you ...