What is Magnetic Permeability?

Permeability is the measure of how a substance or material supports forming a magnetic field within itself. It is the amount of magnetization that the substance will adopt or obtain when inserted into an applied magnetic field The term was first introduced in the early fall of 1885 by Oliver Heaviside with the opposite quality of a substance being called magnetic reluctivity. The magnetic permeability of a substance is designated by the Greek letter, mu or (?) and is measured in henres per meter (H/M) and newtons per ampere squared. These measures are also used to represent the air in a vacuum which is called the magnetic constant and has a value of 4?×10?7 H/m that is approximately, 1.2566×10?6 H/m.

Materials are also characterized based on the permeability qualities within the substance. A substance which has a weak attraction to magnets will be labeled in a paramagnetic category with those that repell magnets being diamagnetic.

What Types of Substances Can Become Magnetized?

The magnetic permeability of a substance changes with respect to the position of a material in proximity to a magnetic field, the temperature, humidity, frequency of the field, and other properties. Substances that have a high degree of magnetic permeability are used in transformers ,inductors, and electrocmagnets.

What Substance has the Greatest Permeability?

Metals which are ferromagnetic have the largest permeability of all materials and will always become magnetized when they are exposed to a magnetic field. As the field increases, the permeability will continue to increase until reaching its maximum value at which point it will begin to decrease. These materials are used in both soft magnets (lose their charge when the electrocmagnetic field dissipates) and hard magnets (maintain their charge for a longer period of time). 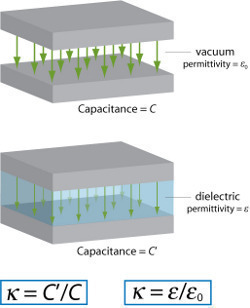 A dielectric constant measures the extent that a material concentrates electrostatic flux and is also ...