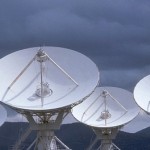 Rainfade refers to a phenomenon that occurs during strong rain or snowfall in which satellite signals are prevented from reaching their destination. Rainfade may also refer to extensive cloud cover, strong winds, or any other environmental effect that distorts a satellite broadcast, but is most often observed during rainfall. Rainfade may also refer to the slow speeds of WiFi and other wireless data transmissions during storms or other undesirable weather conditions that are caused by the same effects. Rainfade can be an irritating and troublesome effect if a satellite company does not take precautions to account for potential rainfade when broadcasting signals.

Rainfade refers to a distortion of radio signals that is similar to the way light bends in water. Although signals are usually received eventually, rainfade can cause data transmissions to be slow, inconsistent, or distorted. Rainfade occurs because individual droplets of water and some particles in the air are able to reflect radio signals at an angle and prevent them from reaching their destination.

Rainfade can be countered by a number of techniques. One way of countering rainfade is by constantly re-transmitting the same information so that a signal will eventually reach its destination. However, rainfade during these types of transmissions may still cause the signal to be distorted, inconsistent, or delayed. Another, more popular, way to combat rainfade is by increasing the uplink power of the transmitter, allowing it to overcome scattering caused by rainfade. Likewise, rainfade attenuation can be calculated by the CCIR Interpolation Formula as well as the ITU-R Frequency Scaling Formula.