The crystal radio is a rudimentary radio receiver that can be made from a few easy-to-obtain and inexpensive parts. It is unique for this type of radio does not require a battery pack, has no moving parts, and can be built using ordinary household materials, yet it actually works. The only power it receives comes from the radio signals.

It should not be surprising that crystal radios work. The basic principles of radio broadcasting make radio crystal operations more than possible. First, the function of a radio broadcasting station (with all its equipment, transmission tower, power supply, etc.) is to convert sounds produced within the studio (whether from CDs, DJs talking, or live bands) into radio signals. These radio signals are then transmitted from the tower outwards, after which they will be picked up by radio receivers.

In the case of crystal radio receivers, the antenna picks up radio signals from the air. The ground wire creates a continuum – a point of entry (the antenna) and a point of exit (the ground) so radio signal electricity is generated. This low-voltage electricity flows through to the radio and is adjusted through the radio crystal tuner to choose a particular radio station's broadcast.

The electricity is then directed to the apparatus that converts radio signal electricity into sound energy. This converter is the crystal detector, composed of a slender wire touching a semi-conducting crystal; primitive radio crystals used galena but more recent models made use of geranium diodes.

At this point, electrical energy is successfully converted into sound energy that humans can hear.

Conventional radio receivers have an antenna and ground wire, too. The process of picking up a certain station's broadcast and the process of conversion from radio signal electricity into sound energy follows the same basic pattern as that of radio crystals.

However, conventional radios require an external power source because they add another process to sound production. This process is amplification. Amplification boosts the electrical signal to the point that it can be heard through speakers.

A basic crystal radio receiver does not have an amplifier. Thus, it requires the use of an earphone or other such device so that the sound it produces can be heard by the user. Crystal radio receivers also require a long antenna to function properly (standard antenna length is from 30 to 50 feet).

The History of Crystal Radios

The basic properties and mechanics of radio broadcasting had been discovered and worked out in the early 1900s and radio stations began broadcasting news and other information to the general public. However, the cost of factory-manufactured radios was prohibitive. The US government therefore taught the general public how to make crystal radios.

Later, radios with amplifiers and speakers became much more inexpensive so more people could afford to purchase a unit. This brought an end to the popularity of crystal radios. Hobbyists, however, still continue to build crystal radios. 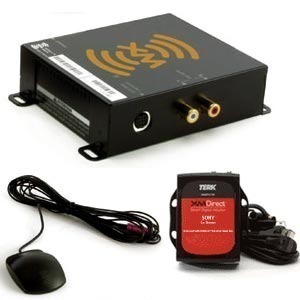 XM radio is one of the two primary satellite radio services in North America. The ...