Plasma screens might seem like new technology because of their heightened popularity in recent years. However, plasma screens were first created in 1964, and have been in use ever since.

A plasma screen consists of pockets of Xenon and Neon gas mixture called plasma, which is located between two electrodes. The plasma is in between two parallel plates of glass similar to that of a LCD television. The address electrodes sit behind the cells or pockets, along the rear glass plate. Transparent display electrodes surrounded by an insulating dielectric material covered by a magnesium oxide protective layer, are mounted above the pockets along the front glass plate. Both sets of electrodes extend across the whole screen. The display electrodes are arranged horizontally in rows along the screen and the address electrodes are arranged in vertically in columns. The vertical and horizontal electrodes form a basic grid that we refer to as pixels.

Plasma is the central element of fluorescent light. The plasma gas is made up of free flowing ions and electrons. If you introduce free electrons into inert gasses by establishing an electrical voltage across it, negatively charged particles will rush toward the positively charged area. The particles will be constantly bumping into each other and these collisions excite the gas atoms in the plasma, causing them to release photons of energy. The atoms of xenon and neon gas release light photons when they are excited. The atoms mostly release ultraviolet light photons which are invisible to the human eye which in turn excite visible light photons.

The released ultraviolet photons interact with the phosphor material coated on the inside wall of the cell like that of a CRT television. Phosphors are substances that emit light when they are exposed to other light. An ultraviolet photon hits a phosphor atom in the cell, making the phosphor’s electrons jumps to a higher energy level heating up the atom. When the electron falls back to normal level energy is released in the form of a visible light photon.

The phosphors in a plasma display emit colored light when they are excited. Every pixel is made up of three separate subpixel cells, each with different colored red, green and blue phosphors. The colors blend together to create the overall color of the pixel. 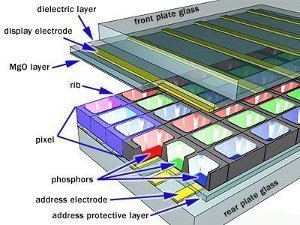 The control system can increase or decrease the intensity of each subpixel color by varying the pulses of current flowing through the different cells, to create hundreds of different combinations of red, green and blue colors enabling the control system can produce colors across the entire spectrum making television watching a much richer experience for all viewers.

So to produce a colored image: