How to Network Two Computers

Computers are the basis for both modern technology and modern society. The world of today thrives on information and getting that information from one place to another is crucial to survival. Even in one’s own home, multiple computers must be able to communicate with one another and other devices. This may seem like a daunting task for the inexperienced user who has never setup a computer network before but it is rather simple. This article will explain what a computer network is and what it is capable of, go over the two types of computer networks, and list several routers that can be used for high speed networking.

What is a Computer Network
A computer network is a connection between two or more computers that allows information to be shared between them. Computers in a network can be in the same room, the same office, the same building, or in some other close environment in which signals can be transferred to each computer. Computer networks allow each computer to communicate with each of the other computers in the network and can even be extended to devices such as printers, scanners, cameras, and mobile devices. While the Internet is a type of computer network, it is usually set aside as its own entity as it does not follow the rules of a standard computer network.

WLAN/Wireless Connection
A WLAN (Wireless Local Area Network) is the same thing as a LAN but does not involve the use of cables. Instead, a WLAN is entirely wireless. WLANs use a router to transmit and receive radio signals that are carried to and from the user’s computer. A WLAN can extend far outside of the home and can be used for multiple computers at the same time. The user should keep in mind that desktop computers may need a wireless adapter for each computer that the user wishes to add to the wireless network.

Belkin’s N+ Wireless Router
Belkin’s N+ Wireless Router uses some of the most recent router technology to expand the range of any user’s wireless network to cover their house or office, no matter how big it is. Belkin’s N+ also features multiple Ethernet ports for wired connections. The device’s main feature, however, is the USB port that it includes which allows the user to add a USB drive or external hard drive to the network and access it from any of the network’s computers.

How to Connect Two Computers Together 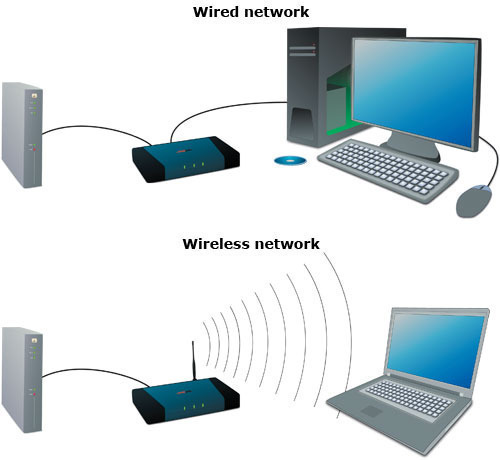 To setup a wireless home network or ad hoc network, you must have two or more personal computers or laptops with wireless network interface cards. To setup a wireless or an ad hoc connection on a home computer, perform the following steps:

Note: To ensure security for the ad hoc network, you can clear the The key is provided for me automatically check box and specify your own 13 digit password.

To connect another computer to the wireless network, perform the following steps: