Wired Equivalent Privacy (WEP) is the encryption algorithm built into the 802.11 (Wi-Fi) standard. WEP encryption uses the RC4 stream cipher with 40 or 104 bit keys and a 24 bit initialization vector.

Most 802.11 devices allow WEP keys to be entered using an ASCII passphrase or in hexidecimal format. The conversion between these two formats is an industry standard which is shared by almost all vendors of 802.11 equipment.

Some 802.11 devices have difficulty using ASCII passphrases or use a non-standard conversion algorithm. For those devices, you will need to use the hexadecimal version of your WEP key.

Powerdog Industries provides a WEP De Facto Key Generator on their web site. The key generator will convert a WEP passphrase to its 40-bit or 104-bit hexadecimal equivalent.

The number and scope of difficulties with WEP security have led to the creation of WPA (Wireless Protected Access).

AirSnort is a wireless LAN (WLAN) tool which cracks encryption keys on 802.11 WEP networks. AirSnort operates by passively monitoring transmissions and computing the WEP encryption key when enough packets have been gathered.

bsd-airtools is a package that provides a complete toolset for wireless 802.11 auditing. Namely, it currently contains a bsd-based Wired Equivalent Privacy (WEP) cracking application, called dweputils (as well as kernel patches for NetBSD, OpenBSD, and FreeBSD). It also contains a curses based ap detection application similar to netstumbler (dstumbler) that can be used to detect wireless access points and connected nodes, view signal to noise graphs, and interactively scroll through scanned ap's and view statistics for each. It also includes a couple other tools to provide a complete toolset for making use of all 14 of the prism2 debug modes as well as do basic analysis of the hardware-based link-layer protocols provided by prism2's monitor debug mode.

WEPCrack is a tool that cracks 802.11 WEP encryption keys by exploiting the weaknesses of RC4 key scheduling.

WepAttack is a WLAN open source Linux tool for breaking 802.11 Wired Equivalent Privacy (WEP) keys. This tool is based on an active dictionary attack that tests millions of words to find the right key. Only one packet is required to start an attack on WEP.

WEPWedgie is a toolkit for determining 802.11 WEP keystreams and injecting traffic with known keystreams. The toolkit also includes logic for firewall rule mapping, pingscanning, and portscanning via the injection channel and a cellular modem. 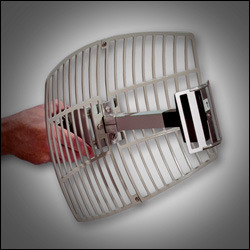 A WiFi antenna is a device that sends and or receives radio signals that computers ...