What does Modem Stand For?

Modem (derived from modulator-demodulator) is a device that makes it possible for a computer to transmit data over regular telephone lines or cable. A modem converts a computer's digital data into analog form to ensure it can be transmitted over telephone lines or cable. The receiving modem at the other end reconverts the data in analog form to digital form.

Modems were first introduced in the late 1960s as a method to permit terminals to connect to computers with the help of telephone lines. The most common terminal of that time was the DEC VT-100. It was capable of displaying 25 lines and 80 characters in each line. The modem would send the ASCII code for the characters typed on the terminal by a user, to the computer. The computer would then send the character back to the terminal.

A company called Vadic released the VA3400 modem in 1972. The VA3400 offered full duplex operation at 1200 bits/s data transmission; it being far ahead of other modems of its time. The next big advancement in modem technology was the introduction of the smartmodem into the market by Hayes Communications. The key differentiator between the Smartmodem and other modems, was, when attached to a controller the Smartmodem would allow the computer to send instructions to it so as to enable it to operate the phone line. The set of instructions that included picking up and hanging up the phone, dialing numbers and answering calls, were known as the Hayes command set. Till today, it continues to be the de facto method for computers to control modems. 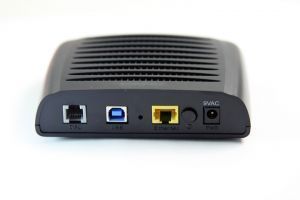 Another popular usage of modems was with Bulletin Board Systems (BBS). A typical BBS setup would include a computer with a modem or couple of modems, BBS software and users would dial in to link to the bulletin board. The BBS users would have terminal emulators installed on their computers to replicate a terminal. The maximum speed of dial-up modems was reached in the late 1990s at 56 kbps. Today’s ADSL and cable modems are capable of achieving much higher data transfer rates of up to and above 10 Mbps.

The key features of a modem are as follows: 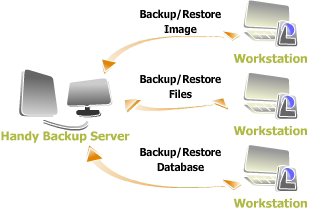 Network backup is any backup system where the data to be backed up traverses the ...