An alternator turns mechanical energy into electrical energy, in the form of alternating current. It is a type of generator, most commonly used by automobiles to power their electrical systems. They are usually mounted on the side of the internal combustion engine. 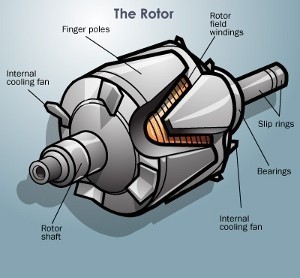 An alternator consists of a rotor, stator, rectifier, housing, and shaft. The shaft is usually connected to the car engine by a belt and pulleys. The rotor is fixed to the shaft, and consists of several wire bundles wound around an iron core. Current is either induced, or passed through sliprings and brushes on the shaft, to create a magnetic field in the rotor. This assembly spins inside the stator winding which is fixed to the housing. A current is induced in the stator, which is then converted to direct current by the rectifier. The stator usually produces three-phase alternating current to allow for a smoother direct current.

An alternator is different to a regular generator in two ways. First, it creates it's own magnetic field using the rotor winding instead of using magnets. This makes alternators smaller and lighter than most generators. Second, it's main winding is fixed to the housing, rather than on the shaft. This allows for more windings in the stator which results in more current.

A regulator controls the output of the alternator by changing the current in the rotor. This changes the strength of it's magnetic field, and the amount of current induced in the stator. It monitors the battery voltage via the "S" terminal and compares it to the output voltage. Modern alternators have the regulator inside the case, but older models had an external regulator.

If the voltage at the battery terminals is lower than expected, the problem is usually a break in one of the stator coils. If there is no voltage, the rotor winding may have a break. Another cause of low voltage is seized bearings.

When the engine is running, the alternator powers the spark plugs, charges the battery, and powers the accessories. An alternator is essential because the battery would quickly go flat doing all this, leaving no charge to start the engine next time.