In computer science, encryption refers to the scrambling of data via a complex algorithm that a password protects. Anyone with the correct password can unscramble the data and access the encrypted device. Wireless routers are often encrypted to ensure that unauthorized users cannot access the wireless router. There are many different forms of wireless encryption and the two most popular are WEP and WPA.

WEP (Wired Equivalent Privacy) is a widely used encryption method that was intended to provide wireless users with the same level of security that a LAN (Local Area Network) would give them. WEP is a rather strong form of encryption and is usually the first line of defense that users can setup through a wireless router. However, WEP has several weaknesses that allow hackers and other wireless users to gain access to a wireless network, the most notable being a limited number of possible encryption keys. Because of this, WPA (Wi-Fi Protected Access) was created to provide users with a virtually unlimited number of encryption keys and a method of regularly switching to a different encryption key, so that anyone who attempts to guess the password does not have enough time to try every possible encryption key before it is updated. Both WEP and WPA can be activated through the user’s Linksys wireless router control panel.

How to Test Network Security

Once an encryption method has been activated on a Linksys wireless router, the user can test his/her network security by performing a procedure known as a “penetration test.” A penetration test is a simulated attack on a wireless network to see if any potential weaknesses exist. A free and open source software that performs penetration tests, known as Wireshark, is available. 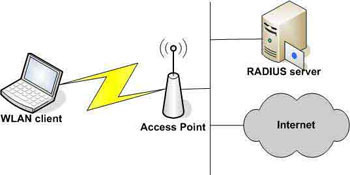 Once the popularity of WiFi started to take off in the early 2000s, a major ...

The SSID (Service Set IDentifier) is a name that identifies a specific 802.11 wireless network. ...