Liquid armor is a new development in the body armor field. It is a material that makes lightweight, flexible and tough body armors possible.

Body armor is a protective clothing designed to stop bullets or bomb fragments and shrapnel from penetrating the human body. They are descended from leather or metal armor designed to stop projectile weapons (arrows or spears) as well as knives or swords.

Whether silk or Kevlar, typical body armor is designed to trap the bullet fired at the wearer and distribute the force propelling the bullet. As such, the force behind the bullet is quickly absorbed and the projectile is stopped before it can penetrate the body. Therefore, body armor is not intended to deflect a bullet. Its sole purpose is to prevent penetration.

First, there is a weight issue with body armors. A typical Kevlar vest weighs in at around four pounds of fabric (more if the 'vest' which covers the torso extends to cover the wearer's arms and legs). This is sufficient protection against most handguns and 'low-powered' .22 caliber rifle bullets, but it cannot stop modern high-powered hunting or military-issue rifle bullets. To protect against high-powered guns and projectiles, use of heavy materials such as metal or ceramic plates inserted into Kevlar vests is required. However, this increases the weight of body armor almost to the point of hampering the user's mobility and agility – which are needed in a fire fight. 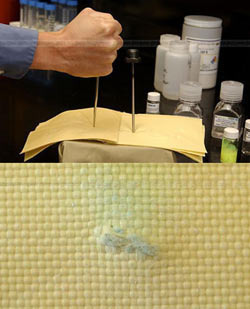 Secondly, body armor designed to stop bullets is not as effective against knives or bladed weapons which can slip in between the weaves of fabric and penetrate the body. In other words, while Kevlar body armor can protect against some bullets, it cannot stop all of them and it cannot stop knives in close combat.

The key behind the newest development in body armor is "sheer-thickening fluid" or STF – a mixture of nanoparticles of silica suspended in non-toxic liquid polyethylene glycol. STF instantly transforms into a rigid shield when struck with adequate force (such as by a bullet or bomb fragment); once the energy of the hit is expended, it reverts back to its fluid state.

STF works best when spread in ultra-thin coats on ballistic fabric. By combining multiple layers of Kevlar and STF, the 'liquid armor' spreads out the impact of a strike better than ballistic fabrics alone. The liquid armor also reduces the required number of Kevlar layers (ordinary body armor requires up to twenty layers) – making for a lighter, flexible protective material.

Initial applications for liquid armor are for law enforcement officers and prison guards, whose primary hazard comes from bladed weapons, and soldiers in combat zones. Other applications, however, are still being worked out: full-body armor (including arms and legs which are not usually covered by ballistic fabric because of the need for flexibility), bomb blankets to muffle explosions or explosive devices and even tactical boots for paratroopers which will stiffen on impact to protect the jumper's ankles. 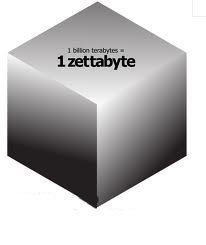 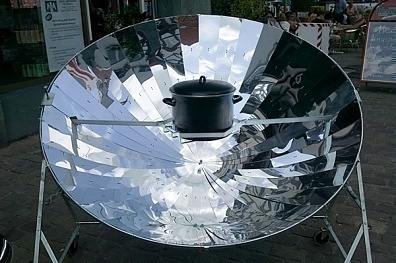 Parabolic mirrors are specially shaped in order to capture and focus energy onto a single ...