The SSID (Service Set IDentifier) is a name that identifies a specific 802.11 wireless network. The name is set by the network administrator who configures the router. Some vendors refer to the SSID simply as the “network name.”

Here is a TP-Link wireless access point being configured with an SSID of “Monticello.” From this point forward, everyone with an 802.11 compatible wireless device will see a network named “Monticello” broadcasting. 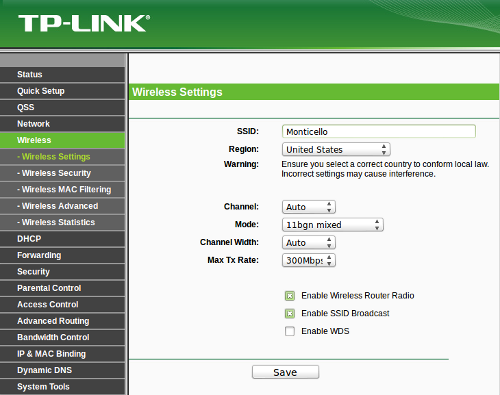 Of course, just being able to see the network does not mean that those people can access the network. Most wireless networks are protected with WEP or WPA/WPA2. Not broadcasting the SSID is simply a form of security through obscurity.

The SSID is limited to a maximum length of 32 bytes. When represented in ASCII form, the characters of the SSID are case-sensitive. This means that “Monticello” is a different network than “MONTICELLO”.