How Do Zambonis Work?

In the world of ice hockey and ice skating, there is nothing more important than maintenance of the ice. Failure to properly take care of an ice rink could result in broken bones, property damage, or the loss of a game. In order to efficiently care for an ice rink, ice rink owners spend large sums of money for a machine known as a Zamboni that is able to shave the ice, collect the ice shavings, wash the ice, and resurface the ice with a fresh layer of water. This article will discuss  what a Zamboni is, the history of the Zamboni, and the process in which a Zamboni treats the ice.

What is a Zamboni
A Zamboni is a large vehicle that is equipped with a long blade, an ice reservoir, a hose, a squeegee, a cloth applicator, a water heater, and many other mechanisms that allow the Zamboni to do its job. Zambonis are only able to reach speeds of 9 miles per hour, although most drivers do not even drive at half that speed. Though it is rather difficult to drive, a single Zamboni is able to clean an entire ice rink in under 8 minutes.

History of the Zamboni
The Zamboni was invented by Frank Zamboni in 1949. Before the invention of the Zamboni, workers had to manually scrape and wipe down the entire ice rink using squeegees, sponges, and buckets of water. This was a very time-consuming and back-breaking task as the ice rink had to be cleaned several times throughout the day. Zambonis today are able to quickly and efficiently clean an ice rink in a matter of minutes and are now considered to be mascots in any particular ice rink. 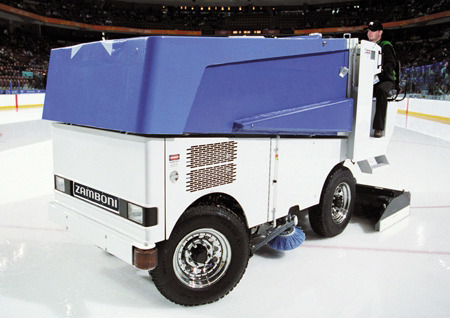 Shaving
The first thing a Zamboni does is shave the ice. This is done so that hockey players and figure skaters do not skate over large clumps of ice and hurt themselves. As the blades of hockey skates are very sharp, they often tear up the ice and create sharp and uneven scars on the ice rink. A Zamboni is able to quickly shave the ice using a 57-pound, 70-inch long, ½ inch thick blade that is sharp enough to slice through a phonebook.

Washing
Once the ice shavings have been collected by the Zamboni, the ice rink must be washed. For this task, the Zamboni has a hose that sprays luke-warm water onto the ice in front of a squeegee. The water in this process is simply used to loosen any residue that is on the ice. The squeegee scrapes up the residue such as coins, teeth, and dirt and holds it in a large tray that rests behind the squeegee in front of the Zamboni.

Resurfacing
Once the ice rink has been shaved and cleaned, it is time for the ice to be resurfaced in order to provide a clean, flat surface for hockey players and skaters to skate over. For this task, the Zamboni uses water that has been heated to 140 degrees Fahrenheit to spray the ice. As the Zamboni drives over the fresh water, coils on the bottom of the Zamboni freeze it almost instantly. As this entire process takes only a few minutes, hockey games and other events can be continued without hesitation.

In a regular oven, a thin layer of air insulates food from the heat beneath ...

The different nuclear processes will use different types of fuel. In general terms: Fission reactions ...